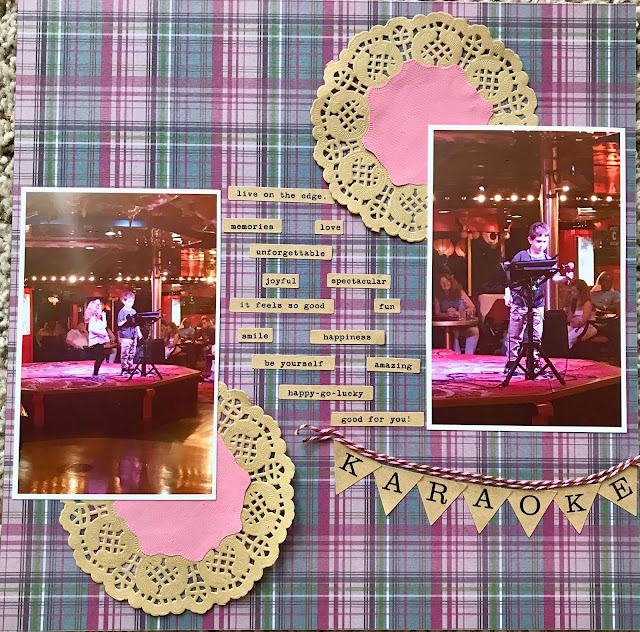 I went about this layout today in a totally different way than I usually do.   I had the sketch #315 from
"SKETCHES IN THYME" and I had printed the pictures last night to use with it, but that was as far as my planning went.     I decided I was only going to use one piece of patterned paper so I went looking for paper that might pull the colors of the stage lighting out from the pictures.   That in itself wasn't an easy task.   Then looking at the sketch I new I needed a couple of circle elements but I didn't just want to draw them on and I had had already decided not to mix any more patterns with my background paper, so I pulled out the two beige doilies and laid them out with the pictures.  Was just going to go with that but decided they needed something else so got two pink doilies out and just fussy cut the center out and put them on top to make a 2 color accent.   I new I had some banner type letters 'somewhere' so started looking for them and was glad to see they were beige too.   So I made my title into a banner and added two rows of bakes town in a pink and purple pattern to make the banner.  Then I was going to journal in the center like the sketch showed but......with the alphas I
used there were also these mini word stickers, so I went through them and picked out what I thought went with the mood of the pictures.....the fun time my two grandkids were having at karaoke night on their cruise ship.   I wish you could make a layout using a video because I have one of them signing, it is really great.   There is no way I would do karaoke and thought it was great this 5 and 6 year old did.   Their Mom said when they started they just jumped up to be first to join in the fun.

Here is the sketch and the link to  "SKETCHES IN THYME"  you have till the 31st to try this sketch or any of the weekly sketches for March. 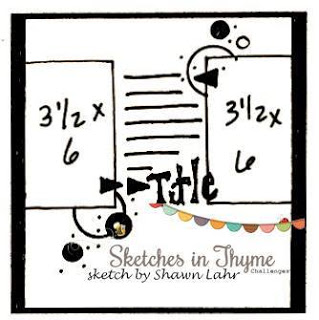 Posted by Barbara Greenberg at 3:55 PM