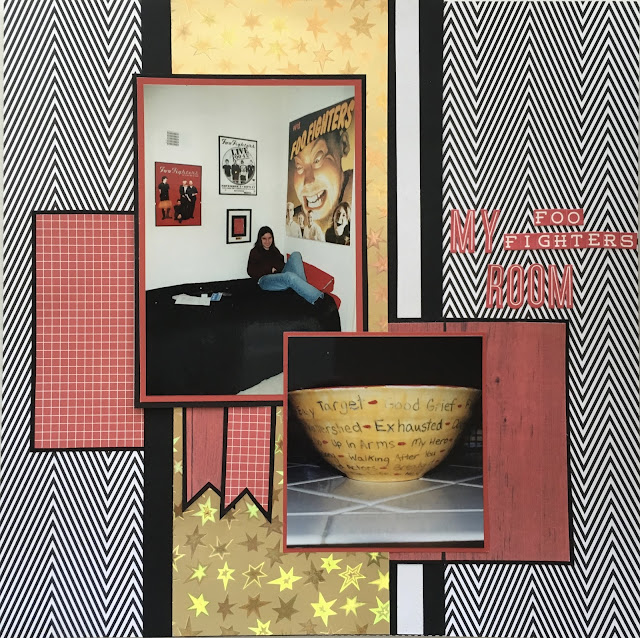 I had to order ink cartridges for my photo printer yesterday so any scrapping I do for a couple of days
will be of old pictures that I had printed or were old as these, pre digital camera pictures that had been developed.

When my daughter was a Junior in High School she became obsessed with the Foo Fighters, so this her room that she decorated all in Foo Fighter memorabilia and pictures.    She also worked part time at a paint your own ceramic studio.    She made this pottery bowl, with the names of all the Foo Fighter songs at the time from the first 2 albums that were out on the bowl, the interior is red and the fired it.     My color scheme for this layout is black and red and some gold stars.   The Foo Fighter logo/emblem colors are red and white so that is also what colors she used in her room.    This picture is actually the beginning or decorating, the room, when she was finished, she had done all her bedroom, the jack and jill bath between her room and the guest room and then some extra pictures and stuff made their way over to the guest room also.

So back to the layout,   I used the week 4 sketch at   "LET'S GET SKETCHY"     It worked out great for the pictures I found, I just trimmed down the bowl picture some and it worked great.

Here is the sketch and go to  "LET'S GET SKETCHY"   to see all the details about the challenge.
You still have till the end of the month to enter this weeks challenge and the other weekly challenges for August. 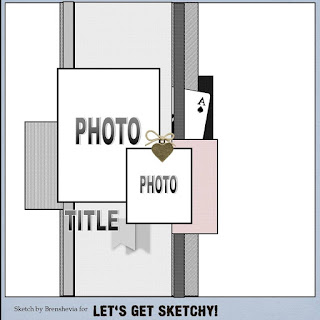 Posted by Barbara Greenberg at 3:06 PM