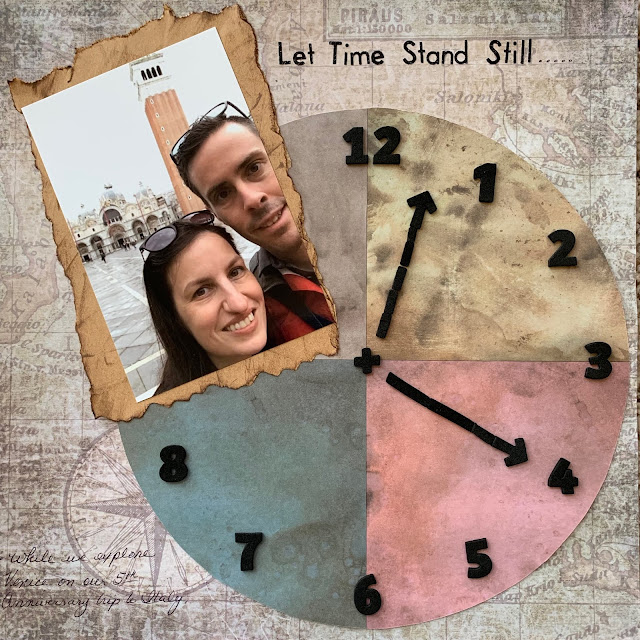 I was really stuck when I first saw the last sketch of the month at  "SKETCHES IN THYME"
But today I went back and studied it some more and came up with and idea.      I have a little bit of everything in this layout.    First off was the idea I came up with.   I have barely started making the album for my daughter and son-in-law vacation this May to Venice and Florence for their 5th wedding anniversary.    I've been waiting till they have time to really go through pictures with me and give me more info on where they took the pictures and some background.   But I do have some general pictures that they posted on FB while they were gone.    I remember when I talked to them once during the vacation they said how they wished they had more time just to sit and look and take in all the sights around them.     So with the looks of the clock in the sketch I first came up with my title... Let Time Stand Still.    Then in my scrap drawer I have been hanging on to this circle I had cut out of the middle of a piece of Tim Holtz paper that was just these 4 6x6 squares together.   I used the outside of what I had cut before ages and ages ago on a layout and just hung on to this circle thinking I would use it.    Well finally I did, it became my clock face.   I pulled out some leftover numbers from Thickers and add those and then made the hands.  The matting for the picture I actually took out of the trash because it was something I had messed up earlier trying to stamp on it.   I just tore the edges and ink all over it in brown ink and put my picture on it.   Did a little bit of journaling on the bottom left and I was finished.

Here is the link to the challenge #378 at  "SKETCHES IN THYME"  and the sketch I used made
by Nadine Carter. 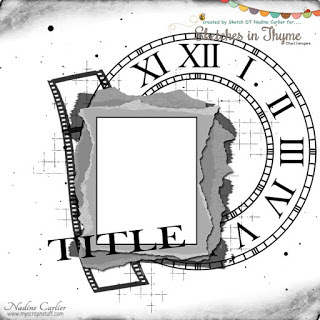 Posted by Barbara Greenberg at 2:56 PM