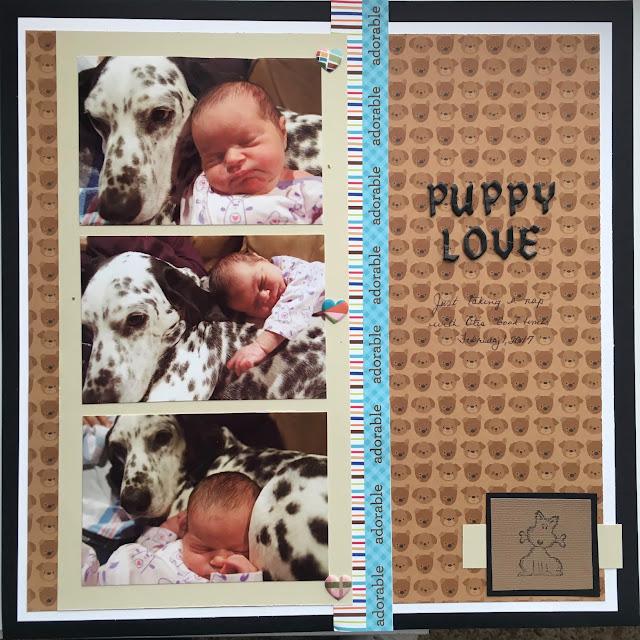 Leslie and Jason had been talking about wanting to get pictures of Elle with each of their 3 dogs.
They were in the kitchen and I was holding Elle while she napped in the family room and I realized Otis, had curled up right next to us.     So I called the kids over, camera in hand, to get some pictures.
They picked up Elle and moved her around with Otis.   In front of him, next to him, laying on his back.   Elle slept right through it all.   Otis was a dream and they got some pretty cute pictures.

When I saw the sketch #122 using 3 pictures at  "SKETCH N SCRAP"   I knew I could pick out
three good pictures with Elle and Otis to use in the layout.     I had just bought this single piece of dog paper at a Scrapbook Store in my hometown that same week that was having a clearance sale on everything.   Only one piece left or I would have gotten more.   I even got the Thickers I used on  the layout at that sale too.     I trimmed down the patterned paper and then double matted it in black and white, to go with the coloring of Otis and I had my layout.

Here is the sketch and the link to  "SKETCH N SCRAP"   they will have 4 different challenges this month. 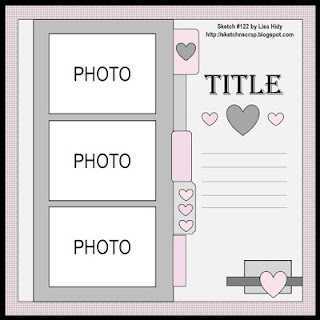 Posted by Barbara Greenberg at 3:03 PM